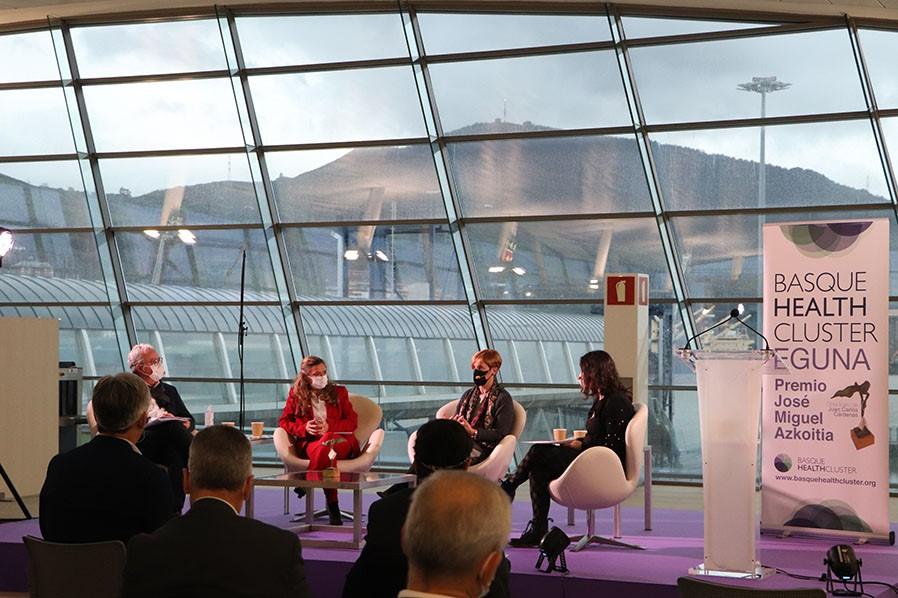 This afternoon, the port of Getxo hosted the celebration of the first Basque Health Cluster Eguna, the Basque Health and Bioscience Companies’ Day, an event at which the Cluster gave the José Miguel Azkoitia Award to the SPRI Group. With the award, they wish to recognise “the contribution of SPRI and its managers who have directly contributed to the birth and development of the Basque Biocluster and Basque Health Cluster, supporting the life sciences sector when its presence in the Basque economy was still small; directly contributing to the consolidation of an emerging sector and of the cluster itself“.

The José Miguel Azkoitia Award was presented for the first time this afternoon in memory of the man who was one of the actors who dedicated the most effort and determination to activate the Bio-Health sector in the Basque Country. With this award, the Cluster aims to distinguish those people or entities that work to promote the sector and/or have had a positive impact on its development.

In this respect, it is worth remembering that in 2000 the Basque Government advocated a decisive boost to the Basque economy by making a strategic commitment to new sectors based on knowledge and innovation. As a result of this reflection, the first strategy specifically designed for the development of biosciences in Spain was born in 2002: the Biobasque Strategy 2010. That same year, 14 companies founded the “Basque Biocluster” association. In January 2017, the Basque Biocluster became the Basque Health Cluster, at which point healthcare provision, medical devices and digital health became part of the cluster.

The award was collected by the Director of the SPRI Group, Aitor Urzelai, from the widow of José Miguel Azkoitia, María José Cardiñanos, who was accompanied by other family members and friends. It is an “Ícaro” sculpture, by Juan Carlos Cárdenas, from Gasteiz. The Basque Health Cluster has chosen this motif because “it is intended to represent the soul of a being who is no longer with us, although he is in our hearts. This winged man in an attitude of movement wants to symbolise the beginning of his journey to Heaven, however each person understands it, but undoubtedly a place where we will see each other again”, explained Asier Albizu, secretary and treasurer of the Cluster and CEO of Biolan.

After collecting the award, Aitor Urzelai expressed his pride at receiving the first edition of the award on behalf of SPRI. “I would like to sincerely thank the Basque Health Cluster for having valued us in this way and I must pass this on to the SPRI team, for the enormous work they carry out in this area”. The Director of SPRI also mentioned the Basque Government’s Department of Economic Development and ended with a tribute to José Miguel Azkoitia, after whom the Award is named, as well as to his family. 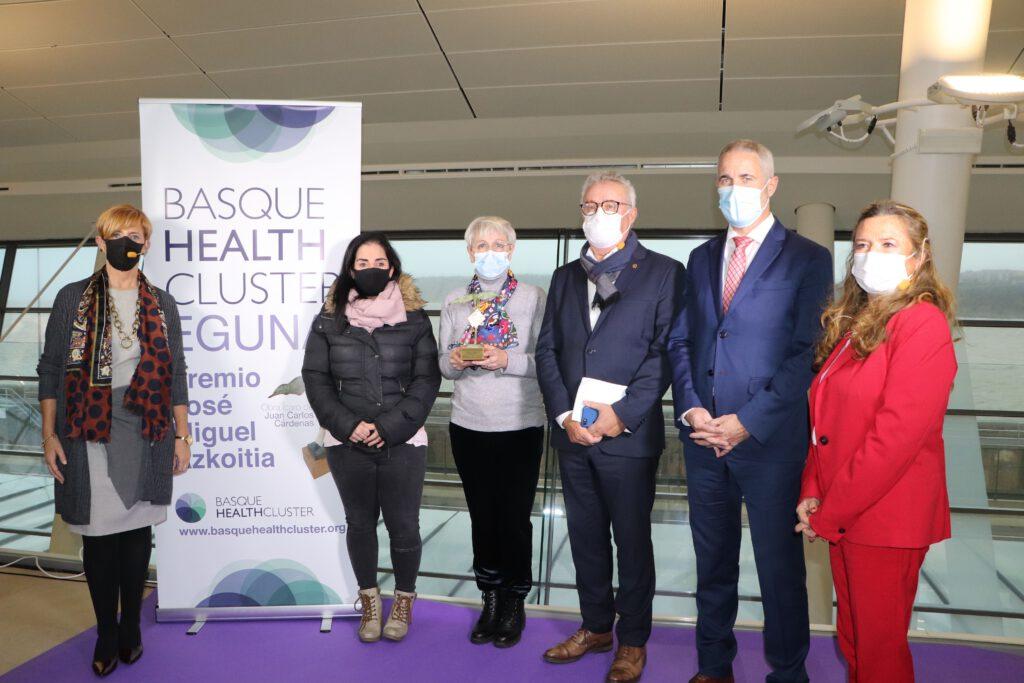 For his part, the president of the Basque Health Cluster, Mikel Álvarez, stressed in his speech entitled “5 years of journey and a long road ahead” that in 2020, during the pandemic “the importance of having a bio-health sector with productive capacity was highlighted. The pandemic crisis highlights the need to invest in the bio-health sector as an essential element. The cluster has managed the crisis by informing, coordinating and mediating to speed up urgent responses, in collaboration with public and private companies and institutions. The cluster, on its tenth anniversary, has become the backbone of the Basque bio-health ecosystem and is growing in the number of members,” he said.

Álvarez added that “we want to turn the Basque Country into a benchmark bio-health ecosystem: dynamic, efficient and sustainable”. To this end, he is committed to: increasing the number and size of bio-health companies in the Basque Country; creating qualified jobs; internationalising organisations; increasing public-private collaboration; producing biomedical research of excellence; and attracting foreign investment.

“Our country is small and our sector is small, but a good collaborative strategy between the administration and companies, along the lines of the Basque Science, Technology and Innovation Plan, plus a good dose of determination, as Joxemi Azkoitia demonstrated, will ensure that we have a presence not only locally, but also at a global level”, stressed Álvarez.

For their part, the Councillors for Economic Development, Sustainability and the Environment, Arantxa Tapia, and for Health, Gotzone Sagardui, held an interesting dialogue on industry and health. During her speech, Tapia stressed that the Basque Government has been working for a long time on the bio-health strategy: “starting from scientific-technological strengths, trying to generate business and for that business to grow. This is a strategy that we have been working on for years and it is a good one. Now we have to realise that we are capable of attracting international investment, that local companies are growing, and that we have to strengthen this whole area, so that this sector really reaches the market. The Industry Plan focuses a lot on this for what“, she stressed.

On the other hand, the Councillor for Economic Development, Sustainability and Environment added that “in the pandemic we have seen that there were certain elements and components outsourced to Southeast Asia and we have seen that we need to have part of these supply chains in Europe. You have been able to respond to the challenge we set you in the public sector, but other challenges will come and we must continue with this commitment: to see which links in this chain we should support and make strategic for the Basque Country. This is our task for the next four years, aspects that are a little different to what we have been doing”, she pointed out.

Gotzone Sagardui, for her part, stressed that in the Basque Country it has been shown that it is positive to commit to public-private collaboration, a model that has been worked on and developed for some time. “A model in which each of us has our role to play. You, the companies, are the enablers. This is a chain of working together and you have a key role in ensuring that your product has an impact on the health of this town and also on its wealth. The Health-Industry work must be even closer, because we have a joint challenge to improve the health of the citizens and also to strengthen the Basque economy”, he pointed out.

After the presentation by Karl Schmieder, CEO of messagingLAB, entitled: “What’s Your Bio Strategy? Preparing the business for the next generation of biotechnology”, a dialogue on synthetic biology took place with the participation of Karl Schmieder himself; Juanjo Rubio, Director of the Social Innovation Unit of Navarra and Julio Font, vice-president of the Basque Health Cluster.

The event closed with a video of the Lehendakari, Iñigo Urkullu, who addressed the audience to praise the work carried out by the Basque Health Cluster over the last five years, “making the biohealth sector a benchmark”. After these first five years, he said, “we share a very positive assessment, with a sector that brings together 150 bioscience and health companies in the Basque Country, 90% of which are small and medium-sized companies, which employ more than 8,000 professionals and represent 1.9% of the GDP in the Basque Country, with a turnover of more than 1,600 million euros”, he recalled.

As well as underlining their growth trajectory, the Lehendakari predicted a promising future for a sector “whose importance has become even more evident during the pandemic. At critical times, you have offered your scientific, technological and economic capacity to society to respond to its needs, and this has a direct influence on its health”, he said.

Urkullu concluded his speech by stating that it is essential to have our own competitive biohealth sector in order to improve the health system. “For all these reasons, thank you, congratulations and here’s to many years to come”, he said.

The Basque Health Cluster Eguna was attended, among others, by the President of MONDRAGON, Iñigo Ucín; the Director General of Business Policy, International Projection and Employment of Navarra, Izaskun Goñi; representatives of the Basque Country’s technology parks, the BRTA and Tecnalia technology centres, and companies such as Faes Farma, Viralgen, Bioef, IMQ, Quirón-Salud, Innoprot, AJL Ophtalmic, Iris Bond, among many others.